SCHOOLS WEEK EXCLUSIVE: CEC WILL CONTINUE TO BE RELIANT ON GOVERNMENT HANDOUTS 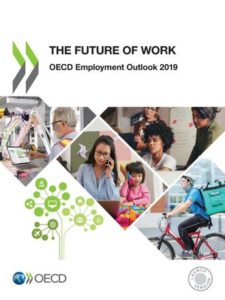 The OECD’s annual report on jobs and employment in OECD countries – http://www.oecd.org/employment/outlook/.
Each edition reviews recent trends, policy developments, and prospects.  They have produced some terrific infographics on the ‘Future of Work’, as well as short informative videos. Download in Excel
Angel Gurría, OECD Secretary-General, estimates that “14% of existing jobs could disappear as a result of automation in the next 15-20 years, and another 32% are likely to change radically as individual tasks are automated. Many people and communities have been left behind by globalisation and a digital divide persists in access to new technologies – resulting in inequalities along age, gender, and socio-economic lines. Not everyone has been able to benefit from the better jobs that have emerged, and many are stuck in precarious working arrangements with little pay and limited or no access to social protection, lifelong learning and collective bargaining.” (Foreword)

The OECD Risks That Matter (OECD, 2019) survey polled a representative sample of 22 000 adults in 21 OECD countries in 2018 – Risks-That-Matter-2018-Main-Findings It examines people’s perceptions of the social and economic risks they face and assesses how well people feel government reacts to their concerns.

Stefano Scarpetta Director of Employment, Labour and Social Affairs, OECD states: “Overall, people are calling for more help from government . In all but two countries, Denmark and France, more than half of respondents say they want government to do more for their economic and social security . This is especially the case for older respondents and those with low incomes . But, perhaps surprisingly, about two-thirds of those with high incomes also want more public support . For many, health care and pensions are the priorities . On average, about half of respondents choose better health care or improved pensions as one of their top three priorities, and almost 40% would be willing to pay an extra 2% of their income in taxes in return . But there are differences across groups . Young people are most likely to prioritise better housing supports, for instance, and parents more likely than others to favour better education services . Those in less prosperous countries often just want more help finding a job”(Editorial).