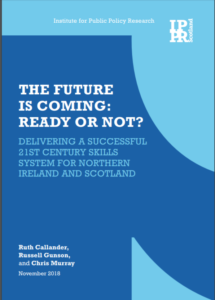 The Institute for Public Policy Research (IPPR) has published a report : “THE FUTURE
IS COMING:READY OR NOT? DELIVERING A SUCCESSFUL 21ST CENTURY SKILLS SYSTEM FOR NORTHERNIRELAND AND SCOTLAND .”

The report makes key recommendations for what needs to change and what needs to stay the same in Northern Ireland and Scotland in order to prepare the countries for the future and the fourth industrial revolution. The report’s key findings include:

The report also made several tailored recommendations for Scotland and Northern Ireland.