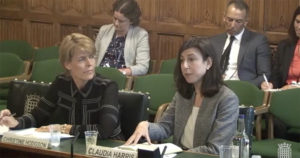 The Education Committee recently questioned the Careers & Enterprise Company in England on its work supporting schools and colleges in improving careers guidance.

On Wednesday 21 November 2018, the Committee had the opportunity to scrutinise the company’s work and its role in implementing the Government’s new Careers Strategy. This was a follow up meeting from the original hearing held in May 2018.

There are major issues re: lack of direct funding to the 3,200+ post-primary schools and colleges in England.

‘Why are your staff better paid than heads?’ careers company asked

MPs have challenged how the Department for Education-funded organisation designed to help schools with careers support spends its money.

The chief executive and chair of the Careers and Enterprise Company (CEC) were grilled by members of the Commons Education Select Committee this morning. It followed a session in May when one MP descried the organisation as a “woeful waste of public money”. During the session, MPs also questioned whether the CEC was making good use of its own research, and whether any hard data existed to show the impact the organisation has had.

Labour MP Lucy Powell asked why £2.6 million of the CEC’s budget was spent on pay. She told the witnesses: “You have got to demonstrate the impact that justifies a lot of the salaries that are more than a headteacher, more than a member of Parliament, more than a senior civil servant earns.” CEC chief executive Claudia Harris said salaries represented 15 per cent of the organisation’s total spend, and were signed off by the DfE. She stressed that its staff oversaw a national network of schools and colleges, and added: “We run a really tight ship in terms of the way we spend the money.”

And when asked about Ms Harris’ £135,000 salary, CEC chair Christine Hodgson said the role had been advertised at £185,000, but Ms Harris “volunteered a £50,000 reduction”, which meant she was paid significantly less than when she was working in the private sector. Committee chair Robert Halfon questioned the organisation’s decision not to seek private sector sponsorship for conferences. He cited a £158,000 conference in Newmarket and an event at KidZania, and added: “I can’t really see how that can be justified at a time of public sector constraint.”

MPs also questioned the amount of money the organisation spent on its own research, amid claims that it had funded programmes that did not follow the research findings. Mr Halfon quoted a CEC research report that said mentoring relationships that last fewer than six months showed few effects, and that “some researchers argue that short mentoring relationships can actually be harmful”. He then listed providers funded by CEC that offer programmes lasting less than six months, and asked: “What’s the point of spending a lot of money on research reports and then not following through your own conclusions?” Ms Harris said that some programmes took a “broader way of working in mentoring” and the CEC looked at what they had achieved historically. MPs also reiterated concerns they raised in May about a lack of quantitative data about the CEC’s outcomes.

The Careers and Enterprise Company has been blasted for spending more than £200,000 on two conferences after MPs demanded to know why private sponsorship for such events was not sought instead. The organisation, which was grilled by the education select committee in May over its spending, had a second hearing with MPs this morning, with questions covering staff salaries and cost of events.

MPs heard the company’s ‘Joining the Dots’ conference cost £158,000 – or £200 per person – with another conference, held at the children’s activity centre KidZania, costing nearly £50,000.

CEC, which has so far received £40 million in public money to support careers guidance in schools, was also given short shrift by MPs about a new survey tool it claims is measuring impact.

Robert Halfon, chair of the education select committee, led the questioning of chief executive Claudia Harris and chair Christine Hodgson. After revealing the ‘Joining the Dots’ conference spend. Halfon said: “Is that money that could go on the frontline? How can that be justified?” Harris said an annual conference helps schools and colleges work together and understand good careers guidance. But Halfon said other similar organisations get private companies to sponsor such events so taxpayers’ money is not used, to which she replied the idea was “a good opportunity for us.” Hodgson added there would be no annual conference in 2019.

Halfon pointed out another conference was held at KidZania for £46,000. Harris and Hodgson appeared initially stumped, with Hodgson saying she thought KidZania had helped to support the event. But then Harris said: “2,000 business volunteers give us a day a month for free. […] That is what we did in return, to offer a learning event.” “It’s how we ensure quality, by providing those events,” she added.

Harris said the conference budget was “probably around” £150,000 to £200,000 a year, prompting Halfon to point out those two conferences mentioned were already more than that put together. He asked Harris: “Do you not understand there are massive public sector constraints […] people could rightly say, ‘why is this money not being spent on the front line?”

People could rightly say: why is this money not being spent on the front line?

It comes as the commons youth select committee has said Ofsted should inspect provision funded by the CEC to check on its impact – an idea which Halfon floated again during the hearing today. However Harris said a new survey introduced in September allows pupils to report on their motivation or resilience following a CEC-funded intervention, with results so far showing a reported increase.

But Trudy Harrison, MP for Copeland, said she would expect exam results to improve if motivation was supposedly higher, and queried why more quantitative data was not being collected by the CEC. Harris responded that as more than the current 3,000 secondary schools and colleges become involved in CEC-funded initiatives, such data could be increasingly collected. Halfon added that “surveys are not enough” to demonstrate the organisation’s impact.

Finally, Lucy Powell, MP for Manchester Central, took aim at the high senior staff salaries at the CEC. According to Hodgson, she as chair is pro-bono at the organisation while Harris is on £135,000. Harris said she asked for a £50,000 reduction in the salary when she was initially offered the role, implying it was originally offered at £185,000. But Powell said the salaries were higher than most headteachers and MPs, the latter of whom are paid around £70,000.

She also queried why a deputy chief executive role was advertised at £117,000. Harris said the organisation was expanding rapidly as the government has announced more careers hubs and needed more senior staff leadership.

In May the CEC was quizzed about why they required a £2 million research budget, the staffing structure and the lack of evidence the organisation was making a difference.

What are your views on this?